A Persian scythed chariot as imagined by the artists at DBA Online http://www.dbaol.com/ I like the style and colour, although someone should have reminded the artist that these chariots just had a driver, no passengers with bows!

As I write a section of the chapter of my dissertation on Greek literature, I have been thinking about how that literature drives ideas about the Achaemenids along certain channels. Achaemenid historians trained as classicists have trouble forgetting a long list of tropes, stereotypes, and traditions which began in the Achaemenid period but were even more vividly expressed in Roman times. A good example is the most famous Persian weapon, the scythed chariot.

One way to look at the scythed chariot is to list the times and places that they were said to be used. Xenophon says that Cyrus the Great invented them (Cyropaedia 6.1.27ff.), and deploys them in one of the imaginary battles of the Cyropaedia, while Ctesias is quoted as saying that the legendary king Ninus of Babylon gathered no less than 10,600 to invade Bactria (Lenfant F.1b = Diodorus Siculus 2.5.4). But Xenophon attributes all kinds of aspects of the real or imaginary Persia of his day to “Cyrus the Great” in the Cyropaedia, and Ctesias’ statements about the distant past are very unreliable. If Ctesias’ informants told him that the chariots were invented “long ago,” it would have been very difficult for him to determine whether that meant “two or three generations” or “two or three thousand years” (and it is not clear that he was more interested in finding the truth than in passing on amusing foreign stories and teasing Herodotus).

Scythed chariots appear on both sides of the Battle of Cunaxa in 401 BCE, then at a skirmish outside of Dascylium in the winter of 395/4 BCE (only recorded in Xen. Hell. 4.1.17-19), and at the battle of Arbela in 331 BCE. After the fall of the Achaemenid empire, they continued in use among the successor kingdoms of Anatolia. They appear in stories about battles from Magnesia (190 BCE) to Zela (47 BCE: Pseudo-Caesar, Bellum Alexandrinum, §75). After the Romans subjugated the lands west of the Euphrates, scythed chariots disappear from the sources. But around the time of Claudius’ invasion of Britain, Pomponius Mela claimed that the Britons used chariots with scythed axles called covinni (de Chorographia 3.6 = § 52) while Silius Italicus said the same thing about the inhabitants of “Thule” (Punica 17.418).

The charge of the scythed chariots at Gaugamela as imagined by André Castaigne before the First World War. Just in case the drawing was not dramatic enough, he added in the elephants which appear in lists of Darius’ army before the battle. Scan courtesy of Wikipedia Commons https://en.wikipedia.org/wiki/File:The_charge_of_the_Persian_scythed_chariots_at_the_battle_of_Gaugamela_by_Andre_Castaigne_(1898-1899).jpg

Another way to look at scythed chariots is in terms of surviving sources. In this case, we have Xenophon and Ctesias who found themselves on opposite sides of the Battle of Cunaxa in 401. Then there is a gap of more than two centuries. Scythed chariots next appear in a group of writers from the first century BCE to the second century CE who were firmly aligned with the Romans (Diodorus, Lucretius, the Caesarian author of the Alexandrian War, Curtius Rufus, Plutarch, Arrian, and Appian not to mention Aelian and Asclepiodotus the tacticians). These writers love stories about Romans defeating the decadent armies of the east, despite all of the exotic weapons and foreign auxiliaries they could muster. They also enjoyed describing the wounds inflicted by scythed chariots in gory detail, with severed limbs, spouting arteries, and startled soldiers not realizing that they have been struck until their bodies fall apart. After Christianity became the state religion, Jerome (Judges 1.19, 4.13), Vegetius, and the author of de Rebus Bellicis all found excuses to talk about the scythed chariot, and that preserved their memory after Greek ceased to be read in the west. 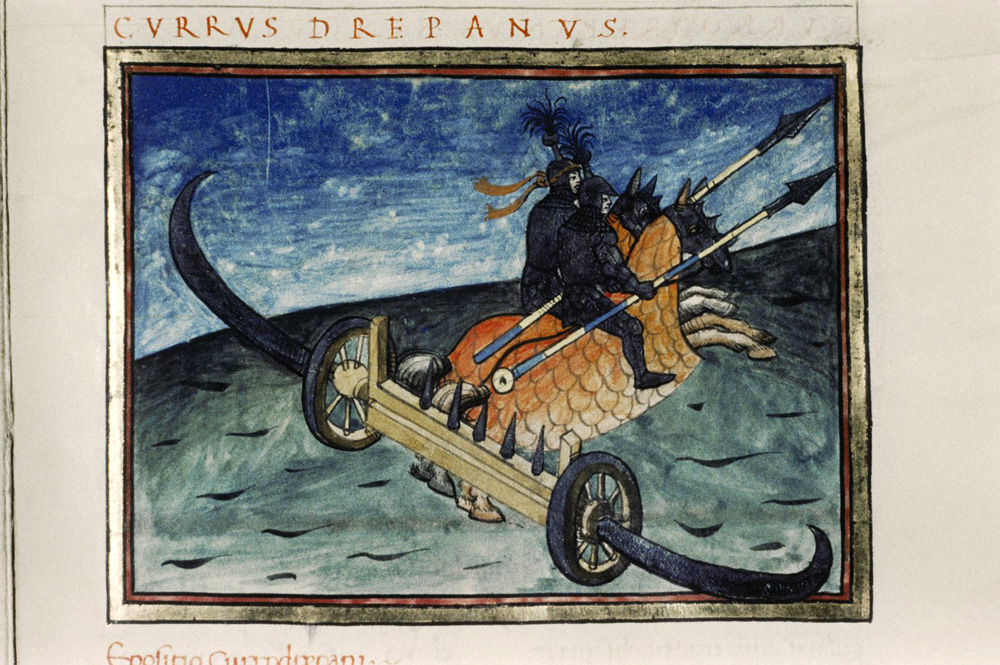 Of course scythed chariots were used after Xenophon and before Caesar. But for that period of 300 years, no source which mention scythed chariots survive. Polybius probably discussed them, but the relevant parts of his history have been lost. No doubt the kings of Pontus had archives listing pairs of scythes and jars of axle-grease, but those have long since perished. So we can only learn about chariots in the intervening period through much later writers.

The scythed chariots of Achaemenid armies seem to have been reasonably effective despite their small numbers. They seem to have been intended to disrupt the enemy formation just before the battle lines came together. Like horse archers or a cloud of skirmishers, their goal was to weaken the enemy not win the battle on their own. (This creates problems for wargamers, who usually want separate units of scythed chariots which can be represented with miniatures, despite sources saying that a few hundred chariots were scattered along the front of an army several kilometres long and numbering tens or hundreds of thousands of men). Xenophon insists that they failed at Cunaxa, but he insists that Artaxerxes’ whole army failed. The other traditions about the battle do not say whether or not they fought well. Xenophon says they were successful outside Dascylium where they broke up a crowd of soldiers who had run together as cavalry approached. It is often said that the chariots at Arbela were useless. However, some of my former colleagues in Calgary point out that the sources are more complicated. It appears that the chariots which attacked Alexander and his Companions were shot down with javelins, but some of the chariots which attacked the phalanx found gaps and rushed through, killing some of the Macedonians until their horses fell or their drivers were pulled down. In other words, in half of our stories about them they are successful, and in the other half not. In the Cyropaedia Xenophon seems to say that scythed chariots are useful weapons as long as they have brave, well-trained drivers and are deployed in the right circumstances.

However, I would argue that writers of the Roman period and stories about Hellenistic armies shape what we say about Achaemenid scythed chariots. It is hard to read Xenophon without thinking of all the other stories about scythed chariots failing, even though those stories were selected as examples of spectacular failure and modelled on Xenophon’s words. The general who trusted in scythed chariots to defeat his enemy and was disappointed became a recognized type in Roman literature, and stories were slanted to fit it. The Alexander historians are not very interested in describing other aspects of Darius’ army, but they are interested in the scythed chariots at Gaugamela.

Now here is another thing. As I thought about it, I realized that I do not know of a single depiction of a scythed chariot before the middle ages, or a single piece of archaeological evidence (although my dissertation has a footnote about the chariot from Biga near the River Granicus). I do not know of a single reference in a document or letter either (of course the cuneiform sources mention plenty of chariots, but no Assyrian relief or Babylonian letter shows chariots fitted with blades). So the only ancient things which can inspire our modern takes on the scythed chariot are Greek and Latin literature.

Do my learned readers know of any exceptions? Is there a Roman coin or Hellenistic relief which I don’t know about? Only you can prevent cranky footnotes when someone reviews the monograph which my dissertation will become.